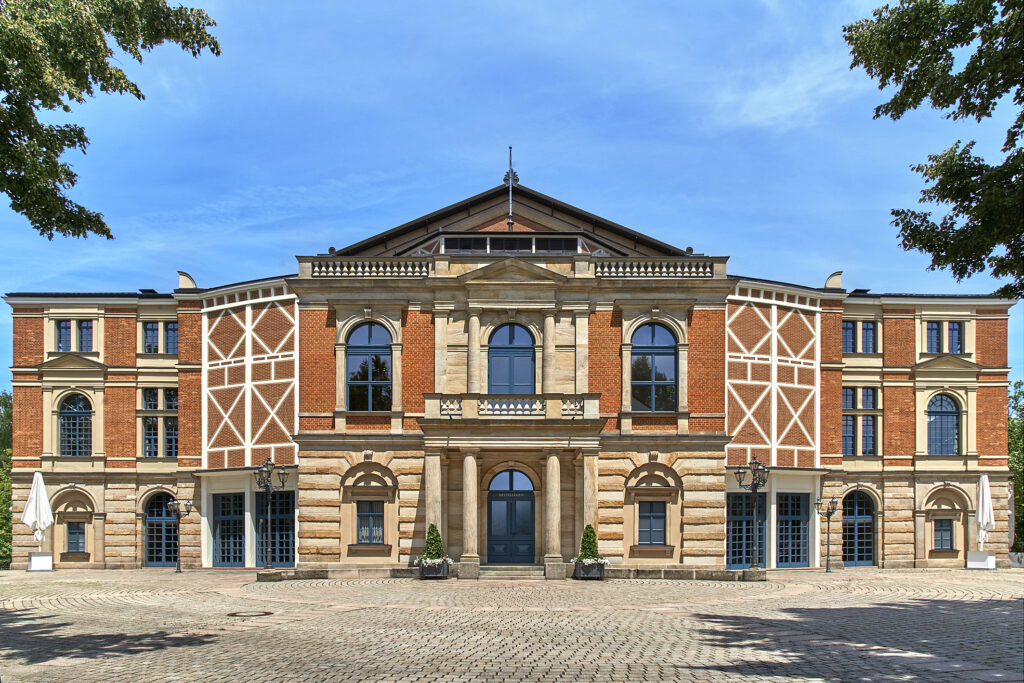 After 25 sold-out performances, the 109th Bayreuth Festival came to a successful close on August 25. More than 22,300 spectators attended the 2021 Festival.
The focus of this year’s festival season was the new production of Der fliegende Holländer under the musical direction of Oksana Lyniv, with staging and stage design by Dmitri Tcherniakov and costume design by Elena Zaytseva.
This year’s festival summer included 25 performances at the Festspielhaus: seven performances of The Flying Dutchman, six performances of Die Meistersinger, six performances of Tannhäuser, three concert performances of Die Walküre, one concert performance of Parsifal under the musical direction of Christian Thielemann, and two concerts under the musical direction of Andris Nelsons.
The Diskurs Bayreuth series of events took place for the fifth time as a supporting program to the 2021 Festival performances. This year, with the Ring 20.21, there were commissioned works of various artistic genres that mirrored, commented on, continued or made it possible to experience all parts of the Ring of the Nibelung in a new way. As a new composition, the music theater work Das Rheingold – Immer noch Loge by Gordon Kampe based on the libretto by Paulus Hochgatterer, staged and realized with puppets by Nikolaus Habjan took place at the pond in the Festival Park. The action artist Hermann Nitsch dealt with the Walküre in a painting action on the stage of the Festspielhaus. In a multimedia work by Jay Scheib – Sei Siegfried – spectators could put themselves in Siegfried’s place and fight the dragon battle against Fafner. An installation on the twilight of the gods by Japanese artist Chiharu Shiota – The Thread of Fate – rounded off the cycle in the Festival Park.
Flanking the Ring 20.21 project, this year’s Diskurs Bayreuth also discussed questions about the theater of the future. Under the title “Is the Future Digital? Music theater and virtual space”, various video statements were published. In a virtual conversation, Georges Aperghis, Calixto Bieito, Hannah Dübgen, Alexander Fahima, Beat Furrer, Georg Friedrich Haas, Sebastian Hannak, David Hermann, Stefan Kaegi, Philippe Manoury, Olga Neuwirth, Falk Richter, Alexander Schubert, Valentin Schwarz, Yuval Sharon and Nicolas Stemann discussed these issues.
Already for the eleventh time this summer, realized by BF Medien, the project Wagner for Children took place. A version of Tristan and Isolde created especially for children was performed ten times with great success at the Kulturbühne Reichshof in Bayreuth.
In addition to the performances in the Festspielhaus, technical pre-rehearsals have continued to take place since April 2021 and staged pre-rehearsals from June 2021 for the new Ring des Nibelungen in Valentin Schwarz’s production, which will premiere at the 2022 Festival.
Next year’s contingent of freely available seats is not yet foreseeable in the wake of the COVID 19 pandemic, so the order form and playbill for the 2022 Bayreuth Festival are not expected to be sent out until late 2021. The “waiting year system” used at Bayreuth will continue into the 2022 season. All registered customers will remain at the same level of waiting years accumulated through the 2021 season.
The Bayreuth Festival looks forward to seeing you again in 2022.