Born in Osaka, 1972. Currently based in Berlin.
Shiota’s inspiration often emerges from a personal experience or emotion which she expands into universal human concerns such as life, death and relationships. She has redefined the concept of memory and consciousness by collecting ordinary objects such as shoes, keys, beds, chairs and dresses, and engulfing them in immense thread structures. She explores this sensation of a ‘presence in the absence’ with her installations, but also presents intangible emotions in her sculptures, drawings, performance videos, photographs and canvases.
In 2008, she was awarded with ‘the Minister of Education, Culture, Sports, Science and Technology’s Art Encouragement Prize for New Artists, Japan’.
Her work has been displayed at international institutions worldwide including the Museum of New Zealand Te Papa Tongarewa (2020); Mori Art Museum, Tokyo (2019); Gropius Bau, Berlin (2019); Art Gallery of South Australia (2018); Yorkshire Sculpture Park, UK (2018); Power Station of Art, Shanghai (2017); K21 Kunstsammlung Nordrhein-Westfalen, Düsseldorf (2015); Smithsonian Institution Arthur M.Sackler Gallery, Washington DC (2014); the Museum of Art, Kochi (2013); and the National Museum of Art, Osaka (2008) among others. She has also participated in numerous international exhibitions such as the Oku-Noto International Art Festival (2017); Sydney Biennale (2016); Echigo-Tsumari Art Triennale (2009) and Yokohama Triennale (2001). In 2015, Shiota was selected to represent Japan at the 56th Venice Biennale. 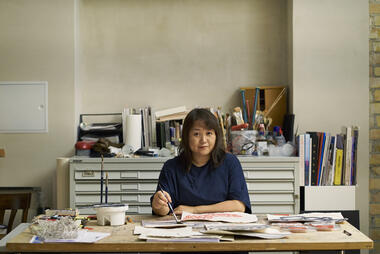