Klaus Florian Vogt is a much sought after guest at all major opera houses and at the Bayreuth and Salzburg Festivals. His career led him amongst others to Munich, Berlin, Hamburg, Paris, London, Barcelona, Vienna, Madrid, Milan, Toulouse, Helsinki, New York und Tokyo. 2005 saw his debut in Japan as Hoffmann („Les Contes d’Hoffmann“), in 2006 he debuted as Lohengrin at the Metropolitan Opera in New York and in 2007 he sang for the first time at the Teatro alla Scala in Milan (Lohengrin), where he later returned as Florestan („Fidelio“). He enjoyed great success as Lohengrin in a new production at the Vienna State Opera and could also be seen in the same production at the Zurich Opera House. In 2015 he sang an outstanding Paul in a new production of „Die tote Stadt“ at Hamburg State Opera. In 2017 he added the role of Tannhäuser to his repertoire, starring in a new production at the Bavarian State Opera in Munich.

In 2007 Klaus Florian Vogt gave a triumphal debut as Walther von Stolzing at the Bayreuth Festival in a new staging by Katharina Wagner of „Die Meistersinger von Nürnberg“. From 2011 to 2015 he achieved further notable success as Lohengrin in the staging by Hans Neuenfels. In 2016 the audience saw him in the titel role of a new production of „Parsifal“ under the baton of Hartmut Haenchen. In 2017 and 2018 he performed Stolzing in an other new Bayreuth production of “Die Meistersinger von Nürnberg”, directed by Barrie Kosky and conducted by Philippe Jordan, in 2019 he will return to the festival for the revival of the production and for the title role in „Lohengrin” in the production from 2018.

Klaus Florian Vogt’s Lohengrin takes him to the most important stages all over the world. Currently no other tenor is as successful in the role of Wagner’s Knight of the Grail. As Lohengrin he has set artistic standards. He performed the role amongst others at the Teatro alla Scala in Milan, Metropolitan Opera New York, Royal Opera House Covent Garden London, Vienna State Opera Zurich Opera, New National Theatre Tokyo, Munich State Opera, Deutsche Oper Berlin, Hamburg State Opera, the Easter Festival Baden-Baden and at the Bayreuth Festival.
The tenor has established his reputation also as a concert singer and a fine interpreter of Lied. His international recital career took him many times to Vienna, New York, London, Athens, Berlin, Leipzig as well as the Tanglewood Festival, the Grafenegg Festival and the Salzburg Festivals. He achieved great success in 2019 with the premiere of a chamber music version of Franz Schubert's „Die schöne Müllerin“ at the Hamburg Elbphilharmonie. His concert repertoire covers works by Mozart, Beethoven, Mahler, Verdi, Flotow und Wagner. He regularly appears with renowned orchestras such as the Gewandhausorchester Leipzig, the City of Birmingham Symphony Orchestra and the Concertgebouw Orchestra in Amsterdam and works with famous conductors such as Daniel Barenboim, Andris Nelsons, Mariss Jansons, Simone Young, Antonio Pappano and Kent Nagano.

Born in Holstein, in the North of Germany, Klaus Florian Vogt studied horn and played for several years with the Philharmonic State Orchestra Hamburg. Later he studied at the Conservatory in Lübeck and gave up his position as a horn player in the orchestra to become a tenor. He made his debut in Flensburg and then became a member of the company at the Opera in Dresden. Since 2003 he has been a freelance artist.

Klaus Florian Vogt has a comprehensive discography. Three solo CDs have been published at SONY Classical: „Heroes“ (2012, Orchestra Deutsche Oper Berlin, Peter Schneider), „Wagner“ (2013, Bamberg Symphony Orchestra, Jonathan Nott) and „Favorites“ (2014, Munich Radio Orchestra, Gerrit Prießnitz). In addition, the tenor has presented amongst others a recording of Korngold’s „Die tote Stadt“ (Frankfurt Opera, Sebastian Weigle), a CD und DVD with hits from Berlin to Broadway co-starring Renée Flemming under the musical direction of Christian Thielemann and a complete recording of „Lohengrin“ with the Radio Symphony Orchestra Berlin under Marek Janowski. The recording of Franz Schmidt’s „Das Buch mit sieben Siegeln“ with the Hamburg Philharmonic Orchestra and Simone Young was released in January 2016. In 2017 followed an other complete recording of „Lohengrin“ with the Concertgebouw Orkest Amsterdam and Sir Mark Elder and a DVD of the „Parsifal“ production from the Bayreuth Festival 2016. In 2018 the Bayreuth production „Die Meistersinger von Nürnberg“ directed by Barrie Kosky has been released on DVD.
In 2012 Klaus Florian Vogt was awarded the ECHO Klassik as „artist of the year”. 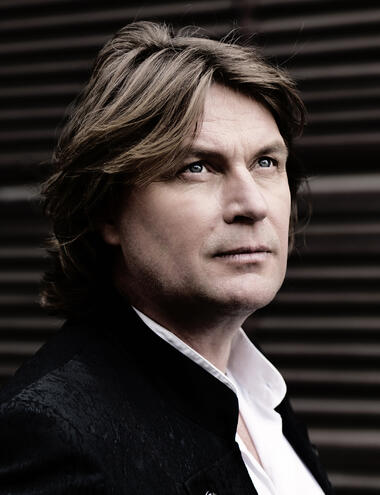