Through her six consecutive years as Bayreuth’s Brunnhilde the British Dramatic Soprano Catherine Foster is becoming well known for her interpretation of Brunnhilde along with her other dramatic roles Elektra, Turandot and Isolde across Europe and the world. Catherine Foster quickly went on to the major houses in Germany as well as onto international stages, including the Bayreuth Festival, the opera houses in Hamburg, Berlin, Tokyo, Washington DC, Budapest, Amsterdam, Liceu, to name but a few.

Born in Nottingham UK, she always had a burn to sing but coming from a non-musical background first qualified and worked as a nurse and midwife. Her yearn to sing professionally continued till she found her teacher, Pamela Cook MBE, who encouraged her to go to university. Finishing her studies in 1999 Catherine Foster started at the Deutsches Nationaltheater Weimar in 2001 where she developed fast into the dramatic repertoire, singing parts like Tosca, Senta, Elisabeth in Tannhäuser and Don Carlo, Leonora in Trovatore, Fidelio and Elektra in Idomeneo. She was soon being asked to sing as guest in other houses such as the Semperoper Dresden, making her house debut there in 2006.

Catherine Foster‘s extraordinarily fast development from her first role of the Queen of the Night to the Ring as Brunnhilde by summer 2008 and onto the centenary Bayreuth production of the Ring in 2013 with Kirill Petrenko conducting shows an unwavering commitment to her art.

2014 Catherine was awarded an Honorary Fellowship of the Royal Birmingham Conservatoire for her work as an international singer. Recently she was awarded the Reginald Goodall award in 2018 for her devotion to the works of Richard Wagner by the London Wagner society. She has had the privilege to work with conductors such as Kirill Petrenko, Marek Janowski, Adam Fisher, Philip Auguin, Simone Young, Sir Donald Runnicles and Daniel Barenboim.

Her last engagements included performances as Turandot at the Munich Staatsoper, the Opera Köln and the Deutsche Oper Berlin. She also sang Brünnhilde with Vienna Symphonic Orchestra at the Musikverein in Vienna, Bayreuth and Washington, as Elektra in Mannheim and Sao Paulo. She was touring also the US with Richard Wagner’s Wesendonck songs and sang Brünnhilde in Siegfried in Odense, Denmark.

Upcoming new roles for Catherine include Färberin in Die Frau ohne Schatten and La forza del Destino. Future engagements will see Catherine returning to the Bayreuth Festival in summer 2018 with Placido Domingo conducting, to reprise her role as Brünnhilde, to the Deutsche Oper Berlin, Opera Bern, the Opera Köln and the Opera Budapest.
Catherine Foster lives in Weimar. 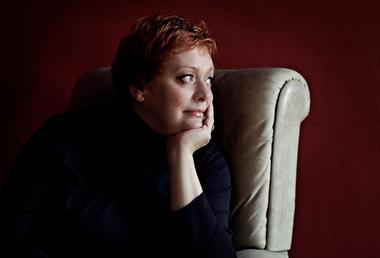