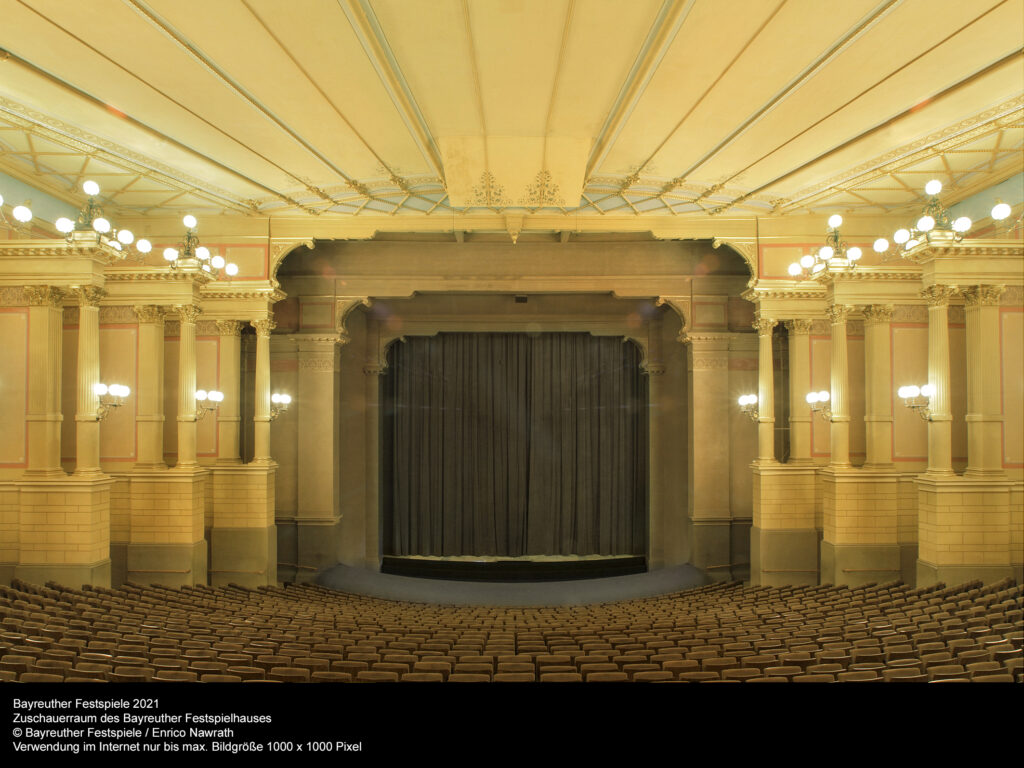 After 29 performances in the Festspielhaus, the 110th Bayreuth Festival comes to a successful close today. More than 50,000 spectators attended this year’s Festival.
The focus was on the two new productions of “Der Ring des Nibelungen” and “Tristan und Isolde”. The latter production was added to the schedule at short notice in order to remain playable in the event of conceivable outbreaks of infection in the collectives, and will be on the schedule again next year. The new production of “Ring des Nibelungen” was eagerly awaited, as it had already been scheduled for 2020 and was performed three times this year as a cycle.
There were also four performances of “Der fliegende Holländer,” five performances of “Lohengrin,” five performances of “Tannhäuser,” and two concerts under the musical direction of Andris Nelsons.
The “Diskurs Bayreuth” series of events took place as a supporting program for the seventh time. This year, hundreds of visitors experienced three enthusiastic performances of the commissioned work “Nach Tristan” in the Reichshof cinema with the great artists Dagmar Manzel and Sylvester Groth. The two acclaimed open-air concerts in the Festival Park were enjoyed by more than 8000 visitors, and these concerts are to be held again next year. This year’s “Discourse Bayreuth” also went out into the city and into nature. On four discursive pilgrimage paths, which could be accessed by the audience with smartphones and headphones for the duration of the festival, the festival city was transformed into a theoretical site where artists and scholars explored the relationship between art and society, autonomy and the Gesamtkunstwerk with excerpts from conversations and thoughts by Chaya Czernowin, Ulrich Konrad, Gundula Kreuzer, Konrad Kuhn, Thomas Macho, Cornelius Meister, Herfried Münkler, Isabel Mundry, Sergej Newski, Holger Noltze, Roland Schwab, Valentin Schwarz and Wolfgang Ullrich.
Already for the thirteenth time, realized by BF Medien, the project Wagner for Children took place. A version of Lohengrin created especially for children was performed ten times with great success on rehearsal stage IV.
Construction work on the stage tower will be completed next year, and 6 wheelchair spaces and a passenger elevator will then be available in the tower on the right. The hall capacity will be 1925 seats.
Order forms for the 2023 Bayreuth Festival will be sent out in the first half of December.
The artistic outlook for the next Festival years includes promising debuts of conductor Nathalie Stutzmann in “Tannhäuser” and conductor Pablo Heras-Casado in the new production of “Parsifal,” as well as the return of two great conductors, Semyon Bychkov for the new production of “Tristan und Isolde” in 2024 and Daniele Gatti for the new production of “Die Meistersinger von Nürnberg” in 2025.
We look forward to seeing you again in 2023, stay well!