Roland Schwab was born in Saint Cloud in 1969 and grew up in Munich. After semesters of study in physics and German language and literature, he began studying musical theater directing under Prof. Götz Friedrich at the University of Music and Performing Arts in Hamburg in 1992. He owes important impulses especially to Ruth Berghaus, whose master student he became in 1994. In 1997, a guest performance brought him to the Berliner Ensemble, where he directed "Frank Alert meets Brecht". After his studies in Hamburg, which he completed with distinction, Roland Schwab was Christine Mielitz's assistant at the Meininger Theater ("Der Ring des Nibelungen") from 1998 on, where he eventually served as head stage manager. In the years that followed, Roland Schwab worked as a freelance director at several theaters in Germany and abroad. Important recent works include "A Rake's Progress" at the Dortmund Opera, "Guillaume Tell" at the Saarland State Theater, "Colonel Chabert" at the Bonn Opera, "Otello" at the Aalto Theater, "Aida" at the Danish National Opera, "Ulenspiegel" at the International Bruckner Festival Linz, and "Lohengrin" at the Felsenreitschule Salzburg. His work for the Deutsche Oper Berlin, "Mozart-Fragmente", "Tiefland" and "Don Giovanni" as well as "Mefistofele" at the Bavarian State Opera received special attention. For his productions Roland Schwab received multiple nominations in the critics' polls of "Opernwelt" and "Deutsche Bühne".
In addition to his directing projects, Roland Schwab also regularly devotes himself to teaching, at the HfMDK Frankfurt as well as at the Bavarian Theater Academy. 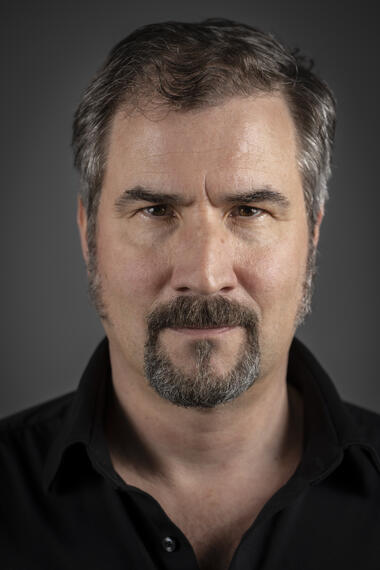