In 1998, at the age of eighteen, he received a scholarship from the Richard Wagner Association in Hanover; in the years that followed, he was a guest performer at the Bayreuth Festival and in 2000/2003 a répétiteur at the Wagner Singing Competition there; in 2004, he was musical assistant for the new production of "Parsifal": Cornelius Meister is now returning to the Grüner Hügel in 2022 to conduct the new production of "Der Ring des Nibelungen".
In 2004, after conducting "Tannhäuser" at the Theater und Philharmonisches Orchester Heidelberg, he was offered the position of general music director there, which he held until 2012. Numerous other Wagner performances and new productions followed: "Der Ring des Nibelungen" at the Latvian National Opera in Riga for the Wagner anniversary year 2013, "Der fliegende Holländer" at the Bavarian State Opera, among others, "Tannhäuser" at the Semperoper Dresden. With "Lohengrin" he opened the 2018/19 season of the Stuttgart State Opera, where he has been General Music Director ever since. Here, in the former "Winter Bayreuth," a new "Ring des Nibelungen" is currently being created under his direction. He has conducted "Tristan und Isolde" at the Royal Danish Opera in Copenhagen and "Parsifal" at the Antwerp Opera. He has made several recordings, including the "Siegfried Idyll" and the "Wesendonck Lieder".
Among the prizes awarded to Cornelius Meister in recent years are the OPUS Klassik as "Conductor of the Year," the International Classical Music Award in the category "Symphonic Recording" for the complete recording of Bohuslav Martinů's symphonies, as well as the Diapason d'Or and the German Record Critics' Prize for the DVD "Jules Massenet: Werther" (Zurich Opera House). Under his direction, the Staatsorchester Stuttgart was also awarded the Innovation Prize of the German Orchestra Foundation in 2020.
As a concert conductor, Cornelius Meister will continue his collaboration in the 2021/22 season with the Orchestre National du Capitole de Toulouse, the Deutsches Symphonie-Orchester Berlin and the NDR Radiophilharmonie, among others. He makes his debut with the Orquesta Nacional de España and the Rotterdams Philharmonisch Orkest. Together with the Staatsorchester Stuttgart, Cornelius Meister devotes himself to the first six and the last six symphonies of Wolfgang Amadeus Mozart and continues the Mahler cycle with the "Resurrection Symphony". But central works of the 20th century (Stravinsky's "L'oiseau de feu" and "Le sacre du printemps") as well as new works of the 21st century are also on the program of the Stuttgart season 2021/22.
In addition to performances of the core repertoire (including the complete Beethoven, Brahms, Bruckner, Schumann, Tchaikovsky, Mahler and Sibelius symphonies), Cornelius Meister's concert programs feature rarely performed works by Zemlinsky, Martinů and Boulez, among others, as well as numerous world premieres. His partners include the Concertgebouworkest, City of Birmingham Symphony Orchestra, BBC National Orchestra of Wales and BBC Philharmonic, National Symphony Orchestra Washington, Mostly Mozart Festival Orchestra New York, Swedish Radio Symphony Orchestra and Danish National Symphony Orchestra, Orchestre de Paris, Orchestre national de France, Orchestre Philharmonique de Monte-Carlo and Ensemble Intercontemporain, Orchestra dell'Accademia Nazionale di Santa Cecilia Rome and Filarmonica della Scala, Tonhalle-Orchester Zürich and Orchestre de la Suisse Romande, and the radio symphony orchestras of NDR, SWR and BR. In addition, he has worked with La Scintilla, Zurich's original sound orchestra. At the age of 21, he made his debut at the Hamburg State Opera. Invitations followed to the Bavarian State Opera in Munich, Deutsche Oper Berlin, Semperoper Dresden, Theater an der Wien, Zurich Opera House, New National Theatre Tokyo, Opéra national de Paris, San Francisco Opera, The Royal Danish Opera and Royal Opera House Covent Garden. He has conducted at the Vienna State Opera since 2012, at Teatro alla Scala Milan since 2015, and at the Metropolitan Opera New York since 2019.
Born in Hanover in 1980, Cornelius Meister studied piano and conducting in Hanover with Konrad Meister, Martin Brauß and Eiji Ōue and at the Mozarteum Salzburg with Dennis Russell Davies, Jorge Rotter and Karl Kamper.
From 2005 to 2012 he was General Music Director of the Theater und Philharmonisches Orchester Heidelberg, from 2010 to 2018 Chief Conductor and Artistic Director of the Vienna Radio Symphony Orchestra, and from 2017 to 2020 Principal Guest Conductor of the Yomiuri Nippon Symphony Orchestra Tokyo.
Already in 2007 he was awarded for the "Best German Concert Program" and since then several times for his education projects. Numerous radio, television, CD and DVD productions are available. As a pianist, Cornelius Meister has performed in Europe and the USA, conducting piano concertos by Beethoven, Mendelssohn, Grieg, Liszt and Gershwin as well as Arvo Pärt's "Credo" from the grand piano. 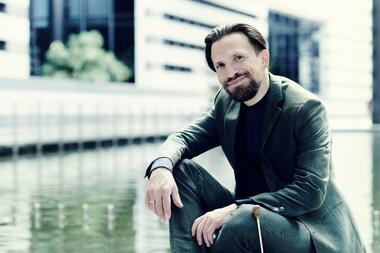