Finnish soprano Tuuli Takala was born in Helsinki and studied singing, violin and music education at the Sibelius Academy in her home town. She made her professional debut at the Finnish National Opera in 2013 as Queen of the Night in W.A. Mozart’s Die Zauberflöte. In 2014  she returned there as Susanna (Le nozze di Figaro). Since 2015, she has been an ensemble member of Semperoper Dresden, appearing in roles such as Gilda (Rigoletto), Sophie (Der Rosenkavalier), Blonde (Die Entführung aus dem Serail), Marzelline (Fidelio), Queen of the Night (Die Zauberflöte), Waldvogel (Siegfried), Olympia (Les Contes d’Hoffmann), Echo (Ariadne auf Naxos) and Valencienne (Die lustige Witwe). Guest appearances elsewhere have included Gilda (Rigoletto), Marguerite (Faust), Zerlina (Don Giovanni) and Königin der Nacht (Die Zauberflöte) for Savonlinna Opera Festival, Queen of the Night for all three opera houses in Berlin, Volksoper Wien, Essen, Toulon, etc., and Amanda Rossi in the world premiere of Olli Kortekangas’s My Brother’s Keeper at Tampere Opera in Finland 2018.
In the 2019/20 season, Tuuli will make her house debut at the Royal Opera House Covent Garden in London as Königin der Nacht, and she will give her role debut as Lucia (Lucia di Lammermoor), Pamina (Die Zauberflöte), and La Contessa di Folleville (Il viaggio a Reims) at Semperoper Dresden. Another role debut as Violetta Valéry (La traviata) will take her to the Opéra-Théâtre de Metz Métropole in France. In summer 2020 she will make her debut at the Glyndebourne Festival as Blonde.
Tuuli is an award-winning artist with 1st Prizes from both the Timo Mustakallio and Kangasniemi singing competitions in Finland 2013, prizes from the 2015 Belvedere Competition in Amsterdam, and the Arnold Schönberg Center Prize from the 2013 Hilde Zadek competition in Vienna. In 2014 the Pro Musica Foundation in Finland named her Young Musician of the Year, and in 2018 the Semperoper Dresden awarded her the Curt Taucher Förderpreis.
Takala has already worked with musicians such as Philippe Auguin, Frédéric Chaslin, Ádám Fischer, Vladimir Jurowski, Susanna Mälkki, Santtu-Matias Rouvali, John Storgårds, Christian Thielemann and Omer Meir Wellber, among others. Her versatile concert repertoire includes Requiem, Exsultate jubilate and the Mass in c minor by Mozart, Ein Deutsches Requiem by Brahms, Orff’s Carmina Burana, Händel’s Messiah, Poulenc’s Gloria, Rossini’s Petite messe solennelle, and J.S. Bach’s Passions, the Mass in b minor and the Christmas Oratorio. She is also a passionate singer of lieder and art song and has performed in recitals and concerts across Finland and in London, Vienna and Tokyo among others. In 2017 Takala was featured as soprano soloist in the ZDF Advent Concert at Dresden’s Frauenkirche with Staatskapelle Dresden under the baton of Christian Thielemann.
In season 2020/2021 she can be heard as Pamina, Micaëla, Capriccio-Sängerin, Adina und Sophie in Dresden. 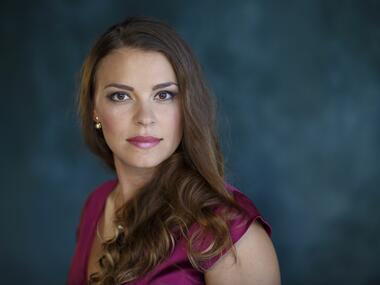