The multi-faceted bass-baritone Werner Van Mechelen has achieved great success in opera as well as in concerts and as a recital singer.

Important future engagements:
During the coming seasons Werner Van Mechelen is invited to sing Heerrufer in Lohengrin at the Théâtre de la Monnaie, Brussels, Alberich in the Ring des Nibelungen at the Deutsche Oper Berlin, at the Erl Festival, in Hongkong and at the Hamburg State Opera, Wolfram in Tannhäuser at the Saarbruck State Theatre, Scarpia in Tosca at the Augsburg Opera and Don Pizarro in Fidelio at the Hamburg State Opera.

His lyric repertoire extends from the baroque, such as Telemann’s Pimpinone and Tracollo in Pergolesi’s Lievietta e Tracollo, to great Mozartian roles like Count Almavira, Figaro, Guglielmo, Don Alfonso, Don Giovanni, Leporello and Papageno. To this he has added roles from Puccini and Verdi – Michele and Gianni Schicchi in Il Trittico, Amonasro in Aida and Ford in Falstaff – not forgetting masterpieces of the 20th century such as Berg’s Wozzeck and world-creations.

A focus is on the german repertoire of Wagner and Strauss:
Wagner: Wolfram in Tannhäuser, Kothner in Die Meistersinger von Nürnberg, Amfortas in Parsifal as well as Kurwenal in Tristan und Isolde. He has interpreted many times and with great success the role of Alberich in Wagner’s Ring Cycle: at the Opéra Royal de Wallonie (also shown on the television channel RTBF), the Nederlandse Opera, Amsterdam, the Vlaamse Opera, Antwerp and Ghent, the Teatro la Fenice in Venice. He sang his first Wotan in Rheingold at the Wagner Festival in Sopot and at the Hamburg State Opera and in Bogota Kurwenal in Tristan und Isolde.
Strauss: Faninal in Der Rosenkavalier and Musiklehrer in Ariadne of Naxos at the Opéra du Rhin, Strasbourg, Jochanaan in Salome at the Opera Monte Carlo, Mandryka in Arabella at Göteborgs Operan and at the Opéra Royal de Wallonie, Liège.

Werner Van Mechelen has a close relationship to the opera houses of Belgium and Holland. At La Monnaie, Brussels he has sung the title role in Berg’s Wozzeck, Nekrotzar in Ligeti’s Grand Macabre, Sancho Pansa in Massenet’s Don Quichotte, the Chambellan Yvonne and the older son in Au Monde by Boesmans. The Vlaamse Opera, Antwerp invited him for Besenbinder in Hansel and Gretel, Ford in Falstaff, Amonasro in Aida, Geisterbote in Die Frau ohne Schatten and Amfortas in Parsifal. At the Nederlandse Opera in Amsterdam he has sung a.o Varlaam in Boris Godunov, Tierbändiger / Athlet in Lulu and Alberich in the Ring Cycle.

Furthermore he was invited to the Opéra d’Avignon (Pizarro), the Gran teatro del Liceu (Nekrotzar) as well as to the opera houses of Paris, Zürich, Cologne etc.

He has sung under the baton of important Baroque conductors such as Sigiswald Kuijken, Ton Koopman and Marc Minkowski, as well as under Hartmut Haenchen, Antonio Pappano, Jeffrey Tate to name some.

The artist has a particular affection for concerts and Lied- recitals:

His concert repertoire extends from Bach's St John's Passion through romantic works such as Elijah and Brahms Requiem, to the song cycles and symphonies of Mahler and to composers of the 20th and 21st Century.
His Lied repertoire includes not only the great song cycles of Schubert, Schumann and Brahms but also repertoire by less known composers. He worked with Eric Schneider, Lucas Blondeel and Jozef De Beenhouwer.

Werner van Mechelen studied at the Lemmens Institute at Leuven with Roland Bufkens and has participated in the Masterclasses of Dietrich Fischer-Dieskau, Elisabeth Schwarzkopf, Robert Holl, Mitsuko Shirai, Hartmut Höll and Malcolm King. He has gained several international singing prizes, having participated in the prestigious Queen Elisabeth Prize (Brussels), the International Vocalists Competiton (‘s-Hertogenbosch), the International Singing Competition (Toulouse), the Vinas Competition (Barcelona) and the Cardiff Singer of the World Competition. 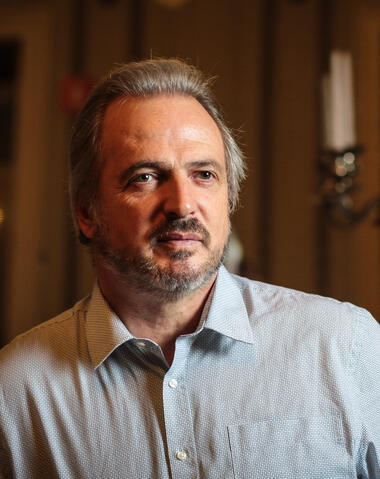