The Dutch soprano Kelly God made her outstanding debut in the role of Isolde in Tristan und Isolde at the Staatsoper Hannover in 2018-19. In May 2019, she repeated the role of Isolde to great acclaim in a new production at La Monnaie / De Munt in Brussels (house-debut) under the baton of Alain Altinoglu.
She is very successful as a “Jugendlich Dramatischer Sopran” at her home opera house in Hanover, with roles as The Marschallin in Der Rosenkavalier, Liù in Turandot, Elisabeth in Tannhäuser, Gutrune in Götterdämmerung, Freia in Das Rheingold, Contessa in Le Nozze die Figaro, Ellen Orford in Peter Grimes, Giorgetta in Tabarro, Gertraud in Der Traumgörge, Katerina Ismailova in Lady Macbeth of Mtsensk and Jenufa as well as Tosca, Sieglinde in Die Walküre and Marie in The Bartered Bride.
In 2017-18, she sung Senta in Der Fliegende Holländer, Gertrud in Hänsel und Gretel, Agathe in Der Freischütz as well as Madame Lidoine in Dialogues des Carmélites. Besides the role of Isolde, in 2018-19 she also performed Senta and Gertrud again.
Kelly God’s recent guest engagements have included Amelia in Un ballo in maschera and Sieglinde in Die Walküre at De Nationale Reisopera, Gerhilde in Die Walküre at the Opéra National de Paris, as well as the role of Tosca at the Domstufen-Festspiele Erfurt, where she achieved a great success. In 2018, the soprano appeared as Senta at the Theater Erfurt.
In 2021, the soprano will make her debut on the main stage of the Bayreuther Festspiele as Helmwige in The Valkyrie. In 2023, Kelly will make her role-debut as Leonore in Fidelio at De Nationale Reisopera Enschede.
As a concert singer, Kelly God can often be heard with renowned orchestras, including the
Württembergisches Kammerorchester Heilbronn, Holland Symfonia, Het Noord Nederlands Orkest, Het Limburgs Symfonie Orkest, Het Brabants Orkest and Het Gelders Orkest with works such as Verdi’s Reqiuem, Haydn’s The Creation, and Beethoven’s 9th Symphony and Missa Solemnis.
For the 50th anniversary of “Het Nationaal Ballet Amsterdam”, Kelly God sang the Vier letzten Lieder by Richard Strauss (choreography: Rudi van Dantzig). In January 2018 she was the vocal soloist in a series of New Year’s concerts conducted by Philippe Herreweghe with the Antwerp Symphony Orchestra. Philippe Herreweghe invited her for the Wesendock Lieder at the Festival de Saintes in summer 2018, where she returned with great success in summer 2019 for a solo recital with pianist Anne Le Bozec.
Kelly God was born in 1975 in the Netherlands and studied voice at the Maastricht Academy of Music with Prof. Mya Besselink, completing her concert diploma and opera examination with distinction.
The soprano attended various master classes in Lied interpretation, including with Elly Ameling, Semjon Skigin and Rudolf Janssen. She is a prizewinner of the Erna Spoorenberg oratorio competition, the prestigious Henriette Hustinx Prize Maastricht and the International Hans Gabor Belvedere Competition in Vienna.
She achieved her first major successes during her studies, including as Magda Sorell in Menotti’s The Consul within the Coupe Maastricht, at the Stadttheater Gießen as Micaëla in Bizet’s Carmen and in the Brazilian city of Salvador da Bahia as Agathe in Der Freischütz.
Kelly God’s first permanent engagement was at the Theater Erfurt in the 2002-03 season, where she made a name for herself as Adriana Lecouvreur, Donna Anna in Don Giovanni, Hanna Glawari in The Merry Widow, Maria Stuarda, Electress Marie in Der Vogelhändler, Amazily in Fernando Cortez, Cook in Waiting for the Barbarians and The Marschallin in Der Rosenkavalier. At the Domstufen-Festspiele in Erfurt she portrayed Maria in Strauss’ Friedenstag and Nedda in I Pagliacci. Through the present day she remains affiliated with the opera house as a guest. 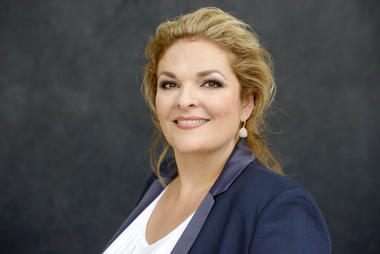