Born in Bishkek in Kyrgyzstan, Katharina Konradi, is the first soprano from this country to have an international career on the recital, concert and opera platforms. She began her vocal training in 2009 with Julie Kaufmann in Berlin, and continued her studies with a Masters degree in Lied interpretation with Christiane Iven and Donald Sulzen at the Hochschule für Musik und Theater in Munich. Masterclasses with Helmut Deutsch and Klesie Kelly-Moog provided the soprano with further musical and artistic impulses.
In 2015, Katharina Konradi became a member of the ensemble of the Hessisches Staatstheater Wiesbaden, where stayed for three years, singing many important roles for her voice type, including Pamina, Gretel, Adele, Susanna, Zerlina and Nannetta. As a result of her noteworthy debut in Hamburg (Ännchen in Weber's Freischütz), Katharina Konradi was engaged by the Hamburg State Opera at the beginning of the 18/19 season, where she is currently still a member of the ensemble. She also made her debut as 'Zdenka' in R. Strauss' opera Arabella at the Semperoper in Dresden in the 18/19 season. In the spring of 2021 she will make her debut as 'Sophie' in the new production of R. Strauss’ Der Rosenkavalier, directed by Barrie Kosky, at the Bavarian State Opera in Munich, the first production of the designated chief conductor Vladimir Jurowski. In the summer of 2021 she returns to the Bayreuth Festival as 'Junger Hirte' in Tannhäuser, directed by Tobias Kratzer. A new production of Mozart's Le nozze di Figaro in Lyon in May 2020 unfortunately fell victim to the Corona cancellations.
As a current BBC New Generation Artist (2018-2021), Katharina Konradi has performed across the UK and has made numerous recordings for BBC Radio 3. Winning the German Music Competition in 2016 led to various important concerts and engagements with renowned orchestras such as the NDR Elbphilharmonie Orchester, the Orchestre de Paris, the Tonhalle-Orchester Zurich, the MDR Symphony Orchestra, the Deutsche Kammerphilharmonie Bremen, the Symphonieorchester des Bayerischen Rundfunks as well as the Balthasar-Neumann-Ensemble under conductors such as Thomas Hengelbrock, Manfred Honeck, Paavo Järvi, Kent Nagano and Daniel Harding.
The upcoming season sees Katharina Konradi sing one of her favourite works, Ein deutsches Requiem by Johannes Brahms, conducted by Thomas Hengelbrock at the Festspielhaus in Baden-Baden. A tour with this work will take her to Hamburg, Bremen, Salzburg, Freiburg, Dortmund, Brussels and Paris. Performances of Mozart's Requiem, which she performed at the Granada Festival at the end of June 2020 under the baton of Andrea Marcon, will also be on the programme in concerts with the Antwerp Philharmonic Orchestra in her first collaboration with Ph. Herreweghe. Song is a big passion of the young soprano. She has made guest appearances at various festivals and concert halls including the Schubertiada in Vilabertran, the song series of the Cologne Philharmonic, and at London's Wigmore Hall, where she will return in October 2020. She will give recitals for the first time at the Elbphilharmonie in Hamburg, the Boulez Hall in Berlin and, together with mezzosoprano Catriona Morison, at the Heidelberger Frühling. Together with the Schumann Quartet she will perform in Madrid and Barcelona (Widmann, 5th String Quartet and Schumann-Lieder op.107 in the version by A.Reimann). Katharina Konradi was a guest on the Arte programme "Stars of Tomorrow" with Rolando Villazón and took part in a film documentary about Clara Schumann, directed by Andreas Morell, which was first broadcast on Arte in September 2019.
Further information can be found on the website of Katharina Konradi:
www.katharina-konradi.com 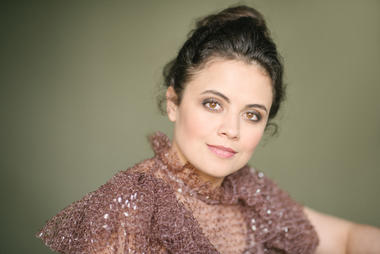