Johannes Martin Kränzle, born in Augsburg, has become known especially for his intense music-theatrical interpretation of complex characters and is one of the leading baritone singers of his generation. He first studied violin and musical theater direction, then voice with Martin Gründler in Frankfurt. The opera houses of Dortmund, Hanover and Frankfurt are his stations in permanent engagements.

His operatic repertoire now includes 120 roles and ranges from Handel, Rossini, Verdi, Strauss and Lehar to Henze and Rihm. (Dionysos (premiere: Salzburg Festival 2010)). His main focus is on Mozart and Wagner as well as the Slavic repertoire: Tchaikovsky, Rimsky-Korsakoff, Prokofieff, Janacek. He performs such diverse roles as Wozzeck, Alberich, Amfortas, Beckmesser, Wolfram, Bluebeard, Tomsky, Prus (The Makropulos Affair), Siskov (From the House of the Dead), Griasnoj (The Tsar's Bride), Bolkonski (War and Peace), Ford and Sharpless as well as Don Alfonso, Don Giovanni, Conte Almaviva and Papageno, Eisenstein and Danilo. He works with conductors such as Barenboim, Janowsky, Jordan, Jurowsky, Levine, Luisi, Metzmacher, Pappano, Petrenko, Runnicles and directors such as Brieger, Jones, Kosky, Loy, McVickar, Mouchtar-Samorai, Tscherniakov, and Wieler.

The baritone regularly devotes himself to concert singing. He gives recitals at the Schleswig-Holstein-Festival, Expo 2000 Hannover, among others. Schubert's "Winterreise" he performs scenically at the Kammerspiel Frankfurt. Bach's Christmas Oratorio in Notre Dame Paris, Bach's solo cantatas in the Dormition Abbey Jerusalem as well as in the Cathedral of Salvador /Bahia in Brazil, Mahler's Songs of a Journeyman at the Budapest Spring Festival and Britten's War- Requiem at the Vilnius- Festival are highlights of his concert career. In 2018 he is baritone in Brahms Ein deutsches Requiem at the Maggio Musicale in Florence (Jeffrey Tate's last concert) and at the Concertgebouw Amsterdam under Bernhard Haitink.
In 1997 he is awarded his composition, the chamber opera DER WURM, at the composition competition in Berlin and premiered it. The cycle "Lieder um Liebe", composed in 2016, based on Brecht's love poems, receives numerous performances.
He is a laureate of the international singing competitions of Vercelli (Viotti), Perpignan and Paris (Placido Domingo). Since winning the Primo Grande Premio in Rio de Janeiro in 1991, he has been an honorary visiting professor in Natal/ Brazil, and from 2013- 2018 a visiting professor at the Cologne Musikhochschule. The baritone is twice, in 2011 and 2018 "Singer of the Year" in the renowned OPERNWELT critics' poll.  In 2011 he receives the Cologne Opera Prize and in 2019 the most important German theater prize: DER FAUST.
In 2015, he is diagnosed with an aggressively progressive form of the bone marrow disease MDS and has to undergo a stem cell transplant. His brother Andreas can be his life-saving donor.
He returns to the stage with great success in September 2016 in his debut at the Royal Opera House London in Mozart's Cosi fan tutte. This will be followed by debuts at the National Opera de Paris (Wozzeck) , the Elbphilharmonie (Alberich/Ring) and the Bayreuth Festival (Die Meistersinger von Nürnberg), among others. 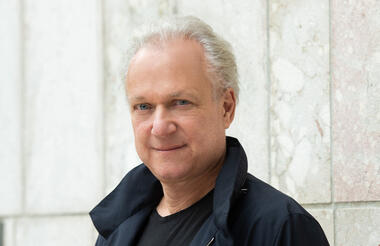