The reigning prima donna of the 21st century, Anna Netrebko has redefined what it means to be an opera star and has become the most acclaimed soprano in the world. In live performance and on award-winning recordings, her portrayals of opera’s most iconic heroines have already made an indelible mark. Now, as she ventures into bolder, more dramatic repertoire, she continues to reach new heights. From singing at the opening ceremony of the 2014 Winter Olympics to becoming the first classical artist named to TIME magazine’s list of the world’s 100 most influential people, Anna serves as opera’s leading global ambassador and is widely recognized as one of today’s most compelling, committed performing artists in any genre. Offstage, on social media, she shares her infectious joie de vivre – along with her love of family, fashion, and food – inspiring people to live their most colorful lives and to celebrate what makes them unique.

Now at the peak of her powers, Anna is drawing on the exceptional maturation of her voice to conquer the most demanding roles of her career. Her title role debut in Giovanna d’Arco at the 2013 Salzburg Festival, and the concurrent release of her Verdi album on Deutsche Grammophon, marked the major turning point when she began to leave behind the lighter, more lyric roles for which she had first become known. Soon followed her first performances as Leonora in Il trovatore at the Berlin State Opera and as the title character in Puccini’s Manon Lescaut at the Rome Opera, where she sang under Riccardo Muti opposite Azerbaijani tenor Yusif Eyvazov, who would later become her husband. At Munich’s Bavarian State Opera, she made her first appearances as Verdi’s Lady Macbeth, a role she reprised in 2015-16 to open the tenth anniversary of the Metropolitan Opera’s “Live in HD” cinecast series, of which she is the acknowledged face and the most frequently featured star. Soon after, she triumphed in the title role of Giovanna d’Arco in La Scala’s season-opening production (2015); made her first foray into Wagner as Elsa in Lohengrin in Dresden (2016); and gave her first performances as Adriana Lecouvreur at the Mariinsky Theater Second Stage, as Aida at the Salzburg Festival, and as Magdalena in Andrea Chénier at her third La Scala opening (2017). She made her title role debut in Tosca at the Metropolitan Opera in 2018.

Anna continues her transition into heavier, more complex roles in the 2018-19 season, when she makes her house title role debuts in Aida and Adriana Lecouvreur at the Metropolitan Opera—the latter in a new production for the company’s annual New Year’s Eve Gala—and sings her first Leonora in Verdi’s La forza del destino at the Royal Opera House. In recital, she joins frequent
collaborator Malcolm Martineau for performances in Austria, Prague, and at Lyric Opera of Chicago and New York’s Carnegie Hall. With her husband, tenor Yusif Eyvazov, she headlines the 350th anniversary of the Paris Opera at the Palais Garnier and makes concert debuts at Hamburg’s Elbphilharmonie and, in Il trovatore, the Verona Arena.

Anna’s present dominance represents the culmination of more than two decades on the opera stage. It was in considerably lighter fare that she first burst onto the international scene, pairing her already rich and flexible voice with vivacity, sensuality and wit in the ingénue lyric roles of Mozart and bel canto opera. She made her stage debut at just 22, as Susanna in Le nozze di Figaro at the Kirov Opera under the baton of her then mentor, Valery Gergiev. However, it was in 2002, bookended by memorable first appearances at the Met and Covent Garden, that her triumphant Salzburg Festival performances as Donna Anna in Don Giovanni most decisively announced her arrival as a star. Fresh successes followed, in signature roles that also included the leading ladies of Verdi’s La traviata, Puccini’s La bohème, Gounod’s Roméo et Juliette, Massenet’s Manon, Bellini’s La sonnambula, Donizetti’s Lucia di Lammermoor, Don Pasquale and L’elisir d’amore, and Prokofiev’s War and Peace. These took her to such leading opera houses as the Met, San Francisco Opera, London’s Royal Opera House, Vienna State Opera, Paris Opera, Zurich Opera, Berlin State Opera, and Munich’s Bavarian State Opera, as well as back to Salzburg, where she became a regular fixture. She appeared as herself alongside Anne Hathaway and Julie Andrews in Hollywood’s Princess Diaries II (2004) and performed alongside Plácido Domingo for an audience of tens of thousands at Berlin’s Waldbühne on the eve of the 2006 World Cup soccer final. In 2007, the year she was named to the “Time 100” list, she headlined London’s famous “Last Night of the Proms,” made her Carnegie Hall debut in concert with the late Dmitri Hvorostovsky, and serenaded film director Martin Scorsese on the CBS broadcast of the 30th Annual Kennedy Center Honors in front of the President of the United States. In 2016 she became one of only a few artists ever to perform a sold-out solo recital at the Metropolitan Opera.

Anna had attained superstar status, but her thirst for new challenges and increasingly powerful voice drew her to ever more complex roles. These included the title character of Tchaikovsky’s Iolanta and Tatiana in Eugene Onegin, as well as Donizetti’s Anna Bolena, a notoriously formidable part that in 2011 – the year she made her debut at Milan’s La Scala – was the vehicle for a triumph in the Met’s premiere staging of the opera. This marked the first of an unprecedented three consecutive season-opening productions she would headline at the New York house, culminating with a new treatment of Eugene Onegin in 2013-14. She scored similar successes beyond the opera house, starring in Robert Dornhelm’s La bohème: The Film, released in 2008 to mark the composer’s 150th birthday; singing alongside Andrea Bocelli in the BBC’s telecast of the 2008 Classical BRIT Awards; giving a recital with Daniel Barenboim at the Berlin Philharmonie; appearing as a featured performer at Newsweek and Daily Beast’s 2012 Women In the World Summit; and reuniting with Hvorostovsky for a televised concert at Moscow’s Red Square. Affirming her standing as one of Russia’s national treasures, she was chosen to sing the Olympic Hymn live at the internationally televised opening ceremony of the 2014 Olympic Winter Games in Sochi.

An exclusive Deutsche Grammophon recording artist since 2003, the soprano boasts an extensive discography that includes solo albums, complete opera recordings, and concert repertoire. Her 2016 solo release, Verismo, debuted at No. 1 on the classical charts in dozens of countries, besides scoring a Grammy nomination and winning the Diapason d’Or de l’Année award in the “Vocal Recital” category. Her previous solo albums for the yellow label – Opera Arias, Sempre Libera, Duets, Russian Album, Souvenirs, In the Still of Night, Anna Netrebko: Live at the Metropolitan Opera, Anna Netrebko: Verdi, Verismo, and DIVA: The Very Best of Anna Netrebko – have all been bestsellers, as have her full-length recordings of La traviata, Le nozze di Figaro, La bohème, I Capuleti e i Montecchi, Giovanna d’Arco, Iolanta, Manon Lescaut, Britten’s War Requiem, the Stabat Maters of both Pergolesi and Rossini, and Strauss’s Four Last Songs. In their first recording collaboration, in 2017 Anna and her husband released Romanza, a collection of original love duets by Russian producer Igor Krutoy. On film, her Wagner debut in Lohengrin was recently released on DVD and Blu-ray, while other highlights from her videography include Ruslan and Lyudmila, Betrothal in a Monastery, La traviata, Le nozze di Figaro, I puritani, Manon, Lucia di Lammermoor, Don Pasquale, Anna Bolena, Eugene Onegin, La bohème, Don Giovanni, Il trovatore, Macbeth, and a DVD of music videos, titled Anna Netrebko: The Woman, the Voice.

Anna’s other honors and awards include Grammy nominations for her recordings Violetta and Russian Album; a 2017 International Opera Award for “Best Female Singer”; the 2016 Opera News Award; Musical America’s 2008 “Musician of the Year”; Germany’s prestigious Bambi Award; and the UK’s Classical BRIT Awards for “Singer of the Year” and “Female Artist of the Year.” A dual citizen of Austria, in 2017 she was awarded the country’s “Kammersängerin” – bestowed only upon its most distinguished opera singers – and in 2018 she received the American Austrian Foundation’s Exchange Prize. In her native Russia, she was awarded the Russian State Prize (the country’s highest award in the field of arts and literature) in 2005, and in 2008 she was given the title of “People’s Artist of Russia.”

Born in 1971 in Krasnodar, Russia, Anna Netrebko studied vocal performance at the St. Petersburg Conservatory. A mother and passionate advocate for children’s causes, she supports a number of charitable organizations, including SOS-Kinderdorf International and the Russian Children’s Welfare Society. Since 2006, she has been a global ambassador for Chopard jewelry. 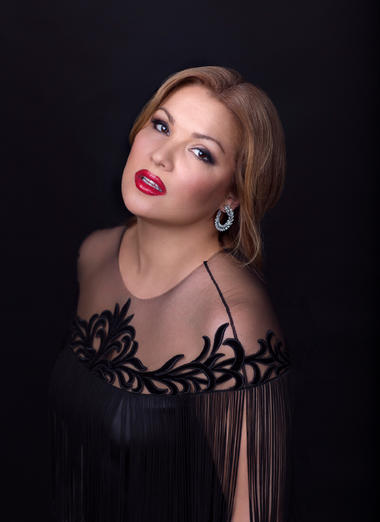